Our banks are still playing the same old game. They need a solid kick up the pants to change their ways.

Between 1997 and 2009, almost a third of lending was between banks. Half went to individuals, mainly on mortgages that fuelled the housing bubble; manufacturing received just 3% of the pie; other business loans accounted for only 17%. Since the crash, net lending to business has fallen by £40bn.

1. 1/3rd of lending is bank-to-bank to cover gambling positions

3. Manufacturing gets just 3% of bank loans. No wonder they are screaming for help

4. Business loans are another 17%, but lending to business has fallen £40bn. So our only salvation, manufacturing and profitable business is ignored by the greedy, casino, banks

Neither can the finance sector credibly claim to be the major source of tax revenue in the UK. It contributed just 6.8% of tax revenues between 2002 and 2008, just over half the amount paid by manufacturers; the reason traditional industry generates more is because it is labour-intensive.

Using Bank of England figures, it is reckoned it could take the finance sector 25 years to repay the £1 trillion costs of bailing it out. Bring it on, NOW.

Radical restructuring is needed to separate their genuine utility functions need from their gambling activities.
Posted by M0IFA at Wednesday, June 16, 2010 No comments:

I give up, I despair, we have no guts in the UK. We are all lazy dimwits and lack understanding of the issues that concern us all.

The big studios have tried to force TV companies in the USA to implement DRM for HD shows, but this was refused and still they show them... but in UK the BBC and Ofcom have conspired to allow DRM on HD TV. The DRM is placed on your program guide and implemented at your home by the box you buy to receive Freeview and Freesat.

UK has caved in. Our own laws of copyright are to be re-written and enforced by large, mainly USA companies. And politicians are doing nothing about it. In fact they are conniving by turning their backs and ignoring the problem.

It means you have to have a UK-only TV and box, incompatible with any other EU country (expect BIG price hikes). And it means you are restricted in what you can do in your own home, with public broadcast shows that you have paid for. This is what the system looks like, all imposed on you in your own home by USA studios and the BBC... 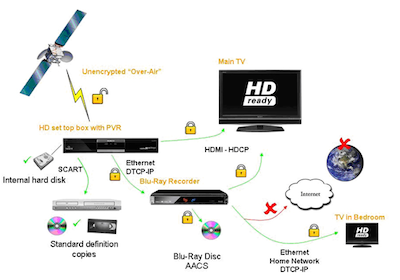 "This technology would control the way HD films and TV shows are copied on to, for example Blu-ray DVDs and shared with others over the internet," Ofcom said. Ofcom have no evidence to support the opinion that people will record and copy to friends shows, or put them on the internet. Anyway those pirates who want to can easily circumvent this DRM. It will only affect ordinary users and force them to buy new boxes.

"Ofcom have taken a decision which pushes technology further towards a copyright-centric model of control, where only copyright holders have the right to decide how everyday devices are allowed work."

"In this new regime, people with hearing problems will be prevented from modifying their equipment to deal with their problems. Software developers will be stopped from making your TV, computer and mobile phone properly working with each other.

"HD devices will have to built to work in the UK alone, reducing competition and pushing prices up."

The complete absurdity and deception being promoted by Ofcom and the BBC is that any DVB-T2 receiver can receive the HD broadcasts without DRM, its just the program guide that gets encrypted!

Let all go out and buy decent DVB-T2 receivers which can receive Freesat perfectly well as the programs them selves are transmitted without DRM
Posted by M0IFA at Tuesday, June 15, 2010 No comments:

Stop this stupid hounding of politicians, stop it NOW.

They have a country to run, they need to be in the public eye, for all the right reasons - for example to let us know what is happening to our deficit, and the restoration of our human freedoms - not because they took advantage of the loose, ill-defined, previous rules about expenses.

There is for sure a lot to be sorted out about pay scales both for politicians and for lots and lots of civil servants. What I believe is that politician should get at least double their current pay, government as well. Then they should have small allowances, no second homes.

All, and I mean all, civil servants, and public bodies like the BBC, should earn less than the prime minister.

There needs to be sweeping changes throughout local government, regional government and at all quangos. Do not hit me with the argument that if we don't pay enough we will not get the people we need. That is stuff and nonsense. We will define a pay grade and get the best we can for that, and set about doing the best job we can. If there are failures then there will be dismissals.