iCloud is a cloud storage facility able to link to Macs and iOS devices. It replaces Mobile Me. And offers a superb set of services, mostly free!!!

Music - Purchases on iOS devices or Mac are stored in the cloud and pushed to other devices automatically. Past purchases (music and TV Shows today) can be downloaded to any Mac or iOS device. All tracks are in 256Kbps AAC format. For $25/year, CDs and other tracks can be matched, and converted to AAC for pushing to other devices.

Photos - Every photo taken on an iOS devices is put in the cloud Photo Stream. Max 1000 photos are kept for max 30days. Photo stream is pushed to all other Mac (iPhoto, permanent storage) and iOS (temporary storage) devices, including Apple TV.

Apps - Apps purchased on any iOS device are pushed to others

Docs - Pages, Numbers, Keynote documents are pushed to the cloud and to other Macs and iOS devices. They are also viewable on the iWork web site. Max 5GB storage for this is free.

Books - Purchases on iOS devices or Mac are stored in the cloud and pushed to other devices automatically.

Contacts and calendar - Pushed to all Macs and iOS devices

Mail - Inbox and Sent pushed to all devices, filing on Mac

Find my Phone/Mac - service available on web and iOS devices

Britain's have a huge debt

With enormous credit to the economist I reproduce here some charts which I think best illustrate the issues that should concern us hugely. Our debts. What does not seem yet to have sunk into the public psych is that it is not only the government who have allowed the national debt to go up and up, and who have now to do something about it, and about whose actions we are see so many complaints… it is we personably and our large financial organisations which have over extended themselves. So we have four debts:

2 The personal debt. Due to credit cards, mortgages

3 The financial or bank's debt. Due to increased leverage of capital reserves and gambling going wrong


4 Non-Finance, or business. Due to lack of planning, un-profitablility, Industrial/financial/service sector unbalance in the economy

And together these place Britain in the worst position in the world with a massive debt of nearly 500% of GDP!!! Take a good look at that figure and let it sink in. The only slight advantage we have over others is the long maturity time of our sovereign debt at nearly 14 years, a lot longer than most other countries. But that is only one part of the total debt. Here are the charts, first the breakdown world-wide for basic sectors. 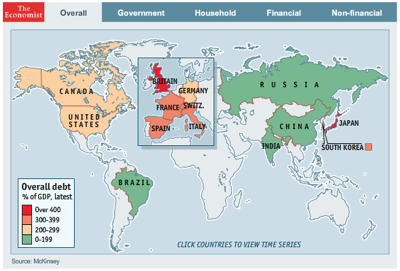 Britain is on the RED. With a huge over 400% debt. Major european countries, except Germany are pink or 100-399%. Next let's look at the split by sector. 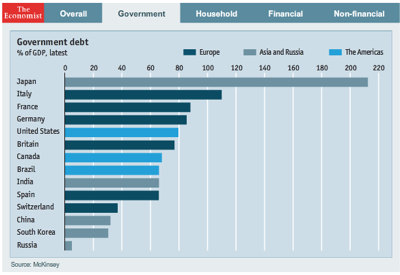 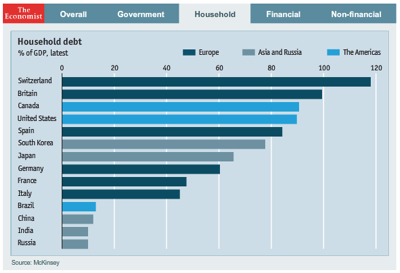 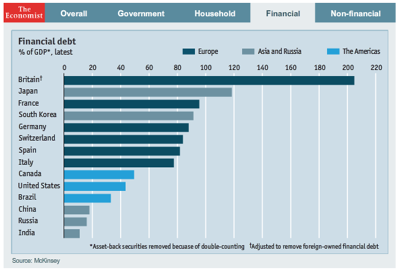 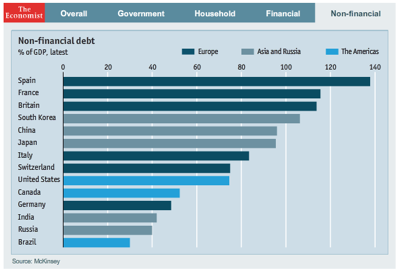 Go add up Britain's totals, these are Government 75% + Household 100% + Financial 205% + Non-financial 115% = Grand total nearly 500% of GDP. Obviously one big problem is the size of the Financial sector, it's simply too big especially compared to Businesses/Non-financial.

You can see this is the charts below, of Britain and others 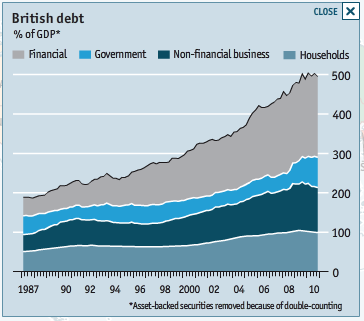 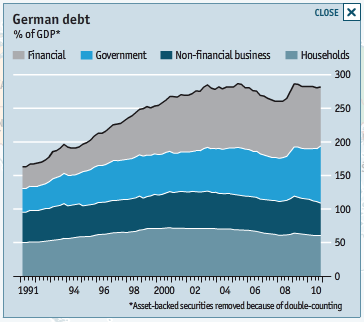 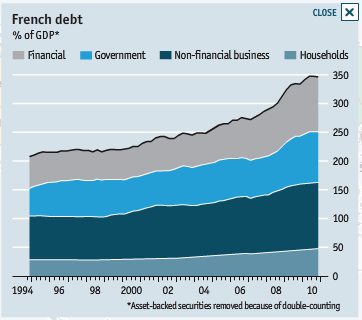 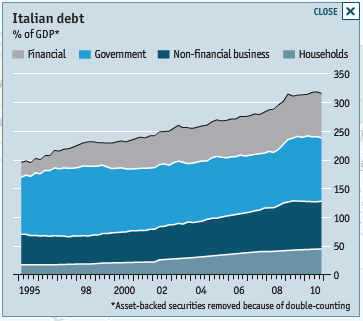 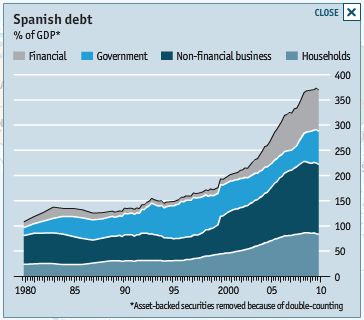 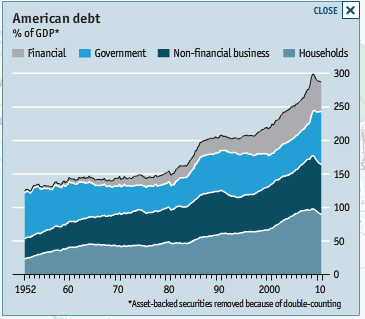 I leave you to have a good look at these numbers, but caution you to make it a long and firm look. Take it in, you are in debt and you have to pay.

Here's the final table of data to consolidate the picture. 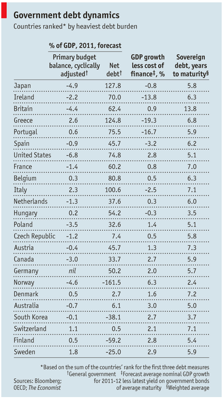 I don't know how to conclude this post. But I hope it serves to bring erbyone to there senses, our banks, our government, ourselves. We are in for years of falling standards as we pay off this debt.
Posted by M0IFA at Thursday, August 04, 2011 No comments:

Finally some improvement on copyright issues

It will become legal to copy a CD (maybe not a DVD which has DRM…?) to another device, and presumably also the cloud…

This is not an incentive to create, imagine a record label (who increasingly now own the copyrights, not the artist…) having a hit 65years ago versus having to invest in new unknown talent, what would you do? Well, promote and continue promoting the hit, and forget the talent whose income potential is unknown.

This is a major disincentive for the talent to be creative, if they can't get a label to sign up to…

This needs to be fixed, 2006 Gower report suggested a length of 7years from the date of creation, and maybe up to 25years, but no more. The new Hargreaves report of 2011 does not mention the issue.

But it needs attention if we are to incentive our artists, not reward labels for doing nothing.
Posted by M0IFA at Wednesday, August 03, 2011 No comments:

Now here's an interesting chart that compares the price you have to pay for 2GB of broadband in various countries world wide.

You wouldn't have thought it would you? USA is by far the most expensive. More than double UK, which itself is 6-7 times more expensive than Japan. And note that the UK access is only HDSPA (or 3.5G) not LTE (4G).

And here's another chart 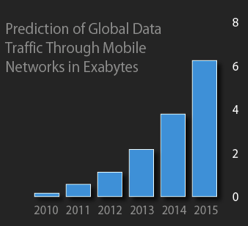 … showing the explosive growth of mobile traffic! Wow! If there's not a huge profit to be made in that I will eat my hat. Mind you it will need lots of new technology and lots of bandwidth - who's for closing down some of those boring TV stations and using the channels for WiFi?
Posted by M0IFA at Wednesday, August 03, 2011 No comments:

First let me say I am not far, about 10M, from the planned HS2 route through Bucks/Oxon.

1 The HS2 will bring ZERO to me, it is a £32B investment only for three or four big cities.

2 The investment must be shared, all of us have to benefit in one way or another, in equal terms

So what should we spend the money on?

If you think about the social and business trends, these point to people being moved apart, not coming together in big cities. People want to live spread out, and yet have work nearby to reduce travel costs. How can this be done?

To work together requires two things, communication and material transport. We need communications such as fast information networks to interconnect our homes, offices and data centres, providing resources like video phone/conference capabilities, shared databases, cloud computing…. And we need transport both for sending parts of a product to other locations for work to be done, or for delivery of the final product. Best provided by short haul road transport.Think electric lorries...

Neither of these objectives is met by building a white elephant high speed people transporting railway between just a few cities! And reducing travel times by a miserable 1/2 hour!

So let's change this and get some things done which will develop society in future directions and benefit us all.
Posted by M0IFA at Tuesday, August 02, 2011 No comments: