I have a growing interest in the communication protocols called WSPR (see previous posting) and QRSS which stands for very slow morse code. I have often wondered if there is much activity on the bands. There are designated frequencies for QRSS which are: 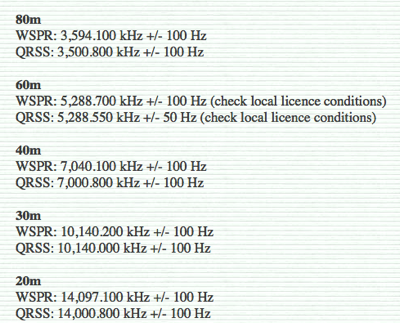 But how about software. QRSS needs basically a spectrum analyser for the audio spectrum, say from 0 to 2500Hz,, and a slow graphing of the signals received across the page. There are a few Windows based programs for QRSS reception but not a single one for the Mac (hey-ho). But their is one for the iPad from Black Cat Systems, called Godaloss (whatever..).

So i downloaded this (£1.99 on the App Store) and rigged up my iPad to the audio output of my iMac, via an A to D convertor iMic (which I can strongly recommend to anyone needing analog In or Out to USB conversion), it has two input sensitivity settings for Line and Mic. The iMic is powered by the battery in the iPad and interfaced using an Apple iPad 30pin to USB convertor.

Next I opened my browser (Safari - the browser must be HTML5 compatible) and went to the on-line site for an SDR receiver in Holland. Tuning to the 7MHz QRSS frequency revealed a number of morse code looking signals, although as of now I have had difficulty reading or understanding the code sent, they are clearly morse, like this: 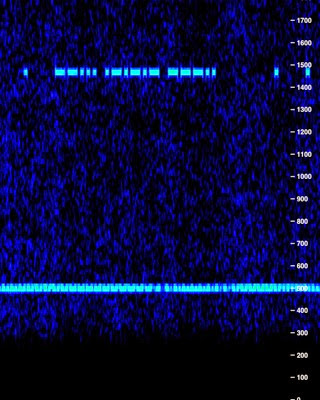 The signals at the bottom is, I think, a WSPR transmission.

I intend to experiment further, and use my own Arduino based SDR receiver to get to grips with QRSS. Then I may try myself to send some signals out into the ether.
Posted by M0IFA at Saturday, September 27, 2014 No comments: