There has been some updates to the code for my ADF4351 VFO.

Try it out. It drives an I2C OLED screen. 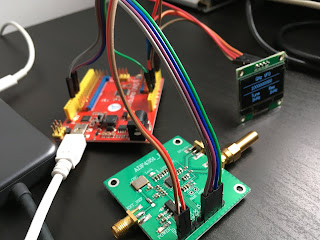 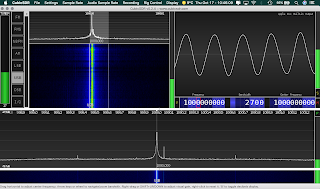 RTL-SDR dongle and CubicSDR software on my MacBook.

A tuneable VFO version is also on my download site.

This implementation has some limitations because the Arduino Uno (Funduino) has only 32 bit maths, and at low frequencies 32bit division foxes the UNO and at high frequencies 32bit is not enough to calculate the parameters for programming the chip. It should be good for 100MHz to 3GHz or so.
Posted by M0IFA at Thursday, October 17, 2019 No comments:

So you are new to amateur radio? You thought it might be an interesting hobby and exciting exploration of communication technology and design. After all you have an electronics technical background. Or maybe you simply would like to talk to the world?

But sadly, it doesn't happen. You get your licence then find that all it consists of is buying a multi-thousand pound black box (ICOM, YAESU, KENWOOD etc) and stringing up a piece of wire in your garden. And that's it. Now you find the amatuer radio bands are quiet and few people want a chat or even a contact.

This outcome has some activites though, you simply take your expensive blackbox into the nearest meadow (or distant island paradise), chuck your antenna up a tree and use it from there. Its called a field day or a contest as you swap call signs and 5 & 9's with as many people as you can.

And then there are radio clubs who do little else than occasionally activities, while spending the rest of their time chit-chatting, more often than not on other subjects but Amateur Radio.

But do not despair, there are a few activities, shrouded in mystery that are pioneering things, for eaxmple Amateur Digital TV or Satellite communicaitons, with strong but somewhat clique clubs that you can join. And there is a background of indivual world-wide bloggs of rather poor content for you to browse. There is also your own RSGB organisation, who have a boring magazine with few stimulating articles except constant reviews of commercial gear and the occasional shallow technical briefing.

At the Banbury Amateur Radio Society we do things differently. We supply ZEST. A deeper interest in what make our hobby tick. In learning about the electronics and signaling technicques of radio, of embedding competance in software coding and in buliding examples of equipment to use this knowledge. We call it "Learn - Code - Build". It has in the last 4 years doubled our meetings to four a month, is well attended and has covered many interesting projects.

1. Software Defined Radio, when SDRs were almost un heard of and noone had seen a waterfall. A project to design and build an SDR receiver, as an example for 40m. Using a digital sythesiser Si5351, an IQ generator 74HC74 and a Tayloe detector FT3253 & dual op amp. Giving IQ audio outputs (0-100kHz stereo audio) to a PC running free HDSDR software. The club designed the PCBs and sourced kits of components for 10-15 people to build the system. It worked very well and opened a lot of eyes. 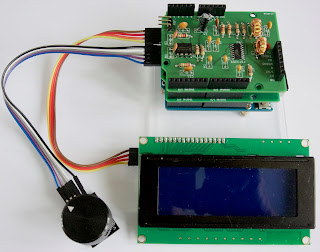 2. A more integrated SDR covering the full 1-30MHz range, using again the Arduino UNO board, our own developed code but a commercial Elektor SDR module that plugs directly into the UNO. This was boxed up in an extruded aluminium box and uses a rotary encoder for tuning and tuning step and a 1.3" OLED frequency display. A really useful piece of shack equipment - an RX and +/-100kHz spectrum display across 1-30MHz.

3. An on-going Arduino coding course which is bringing new ideas and shining lights for members in this new world of coding, with a fundamental START session followed by 25 project coding activities using peripheral devices. An advanced course is availble for dedicated radio apps.

4. A QRP VSWR meter, based again on an Arduino board, this time the very low cost NANO, with an innovative RF front-end using a two hole ferrote toroid and two AD8307 log deectors. This allows VSWR to be measured from 0.1-10W and displays the power and SWR on a 1.3" OLED. 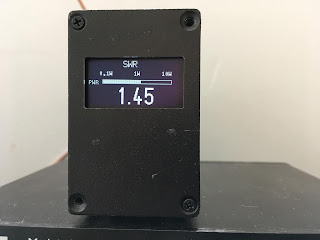 5. A major project was the build of three useful shack items. A three output digital RF signal generator (1MHz to 180MHz outputs), an RF power meter coverng the range -70dBM to +10dBm, and higher powers with external attenuators. And a Direct Conversion receiver aimed at receiving 40m FT8 signals. Kits were sourced PCBs Components and boxes for 15 members to build them. 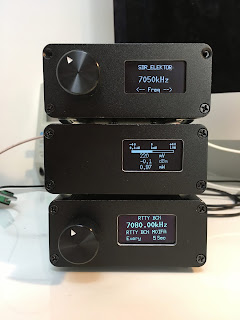 It was followed up by experiments using the signal generator to output WSPR, QRSS, Beacon signals and together as instruments to measure antenna return loss and resonance of tuned circuits.

6. An audio signal generator based on a digital sythesiser. Actually capable of sythesising sine waves from 0-10MHz! Using the AD9833, with code written, again, for the Arduino UNO. 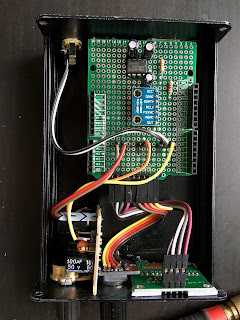 7. How does your blackbox generate SSB? we asked. Turns out few know how it does it (surprising isn't it?). So we designed and built a breadboard to show how it is done. With carrier and VFO RF inputs from our signal generator (#5 above) and audio input from our  audio generator (see #6). The SSB exciter was built using an audio-carrier mixer (11MHz input), followed by a xtal filter (4 stage 11MHz) and another VFO mixer (4 or 18MHz for USB of LSB output) an a final band pass filter and output stage. All stages used BF245 JFET devices.

8. The latest project underway is a GHz VFO digital freuency denerator based on the ADF4351 witha 3.3V Arduino UNO to output around 100MHz to 3GHz. The coding is on-going. (See above blog post)

10. And don't forget our summer "Pixie Challenge". A race to build the low cost RTX kit found on eBay and read a CW beacon transmission in the club house. Followed by a challenge to make a CW QSO with another Pixie. Surprising how rusty our CW was... 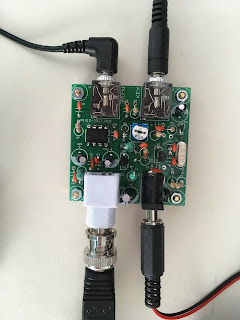 That's ZEST. And that's the way to stimulate more club membership and lots more interest in our hobby.

Find out more on this blog and at my download site M0IFA.me