I have been using my iPad with the Blackcat Systems SSTV program to view SSTV pictures. The output of the iMac was connected to a A/D converter, the Griffin iMic, which was then plugged into the iPad. [I have used the same I/O device to listen to an SDR radio…]

This all ran well but the problem was that when I plugged the iMic in to the iMac headphone jack, I lost the audio output from the internal loudspeakers, and so could not monitor the audio signals or tune around the band without unplugging the iMic…

So how to output audio to multiple devices? Well there is a way. Open the utility Audio MIDI Setup, and chose to add a device (+ sign). Then chose Multiple Output Device, now select the outputs you want to receive the signals. Here's a screen shot: 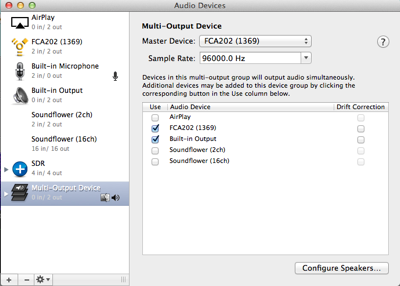 In my case I was outputting the signals from Web based SDR radio at http://websdr.ewi.utwente.nl:8901. 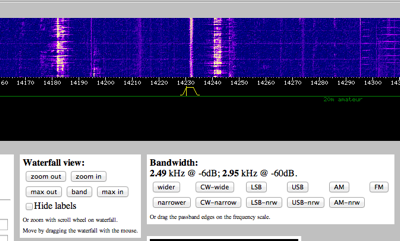 and tuning to the SSTV frequency of 14230kHz - you can see a signal coming in.

I can now drive the iMic/iPad and listen via an Firewire audio interface, the FCA202, with a small battery powered loudspeaker plugged into the headphone jack. Or I can plug the iMic into the FCA202 headphone output to pick up the audio at the same time as it plays through the internal iMac loudspeaker.

I have had two or three crashes of Safari when listening to the radio I mentioned above, I have no idea why. To cure the problem I was forced to remake and select (Alt-Speaker Icon) the Multiple Output device and then restart Safari. Bug reports sent to Apple.
Posted by M0IFA at Tuesday, July 30, 2013 No comments:

My wife, Maggie, has run out of disk space - mainly from having over 12,000 picture in iPhoto!

So I plan to install a spare 500GB HDD that I have lying around. The problem is that I don't have the original OS X installation disk that came with the computer. But Apple to the rescue, as the computer, an old 13" white Macbook, has been upgraded to OS X Lion (10.7) and this can be installed over the internet from Apple.

BACK UP TO TIME MACHINE EXTERNAL DRIVE!!!

Then first you need a copy of a program called Recovery Data Assistant. This has to be down-loaded from the Apple web site.

You then need a USB stick which has to be (*) formatted using Disk Utility, as Mac OS Extended (Journaled) and selected and partitioned as one partition with the Option of GUID. This makes it suitable for a bootable drive. The Recovery Data Assistant app is copied onto this USB drive - needs above 1GB, I have an 8GB drive so that's OK.

Next you replace the physical HDD in the computer - this is fairly easy and there are instructions on the Apple web site.

Now restart the computer an hold down the Alt key.This will bring up a picture of all the drives on the machine, one of which will be the USB "Recovery" stick. Chose it.

Now you must erase the new HDD and format it correctly, from the Recovery Data Assistant chose the menu option of Disk Utility. Then, as above for the USB stick (*), format and partition the drive as bootable.

Now quit Disk Utility and still in the Recovery Assistant select to Install OS X from the internet. Join your local WiFi network and follow the on screen instructions - you will need the Apple ID you used to purchase the original OS X Lion and the password.

After about an hour you will have a brand new computer, running OS X Lion. You can transfer the old HDD files back from the External Backup Drive using the Utility Migration Assistant.
Posted by M0IFA at Friday, July 26, 2013 No comments: 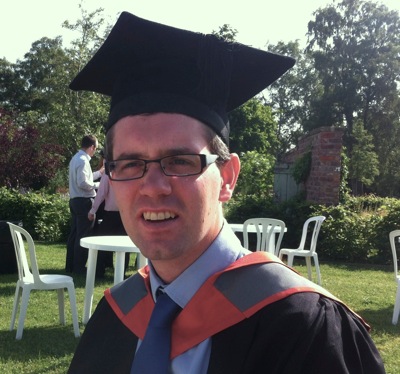 For some time I have been mightily disappointed in the DAC that I had in my music system. I built an amplifier using the excellent Hypex modules; chosen for two reasons, bandwidth (up to 50kHz) and low distortion. But I couldn't find a low cost DAC and had to fall back on what I thought was the best from HK, since I object to paying the ridiculous prices asked for by most audio companies. (I should explain. Wolfson in UK make the best ICs for building a DAC, there WM8805 SPDIF interface and WM8740 DAC are by far the best in the industry. And they cost less than 10$, so why should I pay 1000$ for a DAC?).

But then I found that some sensible HK supplier had taken the application note for the Wolfson chips and made a DAC, for £80! Complete in a nice box, with headphone amplifier also, and with an AC power supply. This DAC covers all bit depths (16 & 24) and all sample rates from 44.1 to 96kHz. So I bought one.

I coupled this DAC up in one of two ways:

1 Optical input from my Apple TV, and streaming music over from my iMac by WiFi. This was the response: 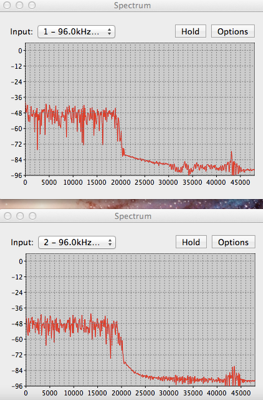 As you can see it cuts off sharply at 19kHz, this is due to the way Apple's Airplay handles the transfer, any file in iTunes is down sampled to 44.1kHz before being sent over the WiFi, and at the Apple TV end there is a low pass filter at around 20kHz. The idea being that music only needs a 20Hz - 20kHz bandwidth, an idea which I find ridiculous - for a violin to sound like a violin you have to pass all the frequencies it generates, and these stretch up beyond 50kHz.

2 Optical input from my MacBook with Audio MIDI setting to output 96kHz. This was the DACs response: 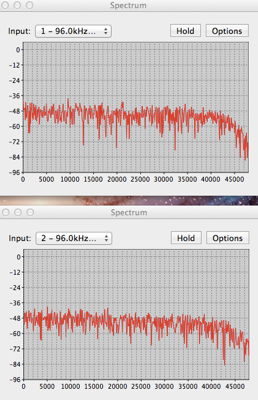 Well now isn't that better? A response out to nearly 45kHz - against the maximum you could expect from a 96kHz rate of half that or 48kHz. And note that the response goes down to DC, as do my amplifiers.

What is very exciting is that with "Home Sharing" turned on, so that I can access music on my iMac (some of which is 24/96) then playing a track through the MacBook gives the wide bandwidth, the same as playing directly from the MacBook!

Now I am sure that I am sending all the possible frequencies from the music files to my speakers. What they do with it is another question… but it sound much better.
Posted by M0IFA at Monday, July 01, 2013 No comments: